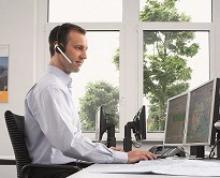 Lufthansa Systems today announced that the Spanish regional airline Air Nostrum has renewed its contract for the Lido/Flight flight planning solution for another four years. The contract renewal is accompanied by a migration to the new product generation Lido/Flight 4D. With this Air Nostrum will benefit from an even better integration, a more modern graphical user interface and display, 4D optimization and extensively automated flight planning and control processes.

“We have been using the flight planning solution from Lufthansa Systems since 2005 because the product is very reliable and meets our needs,” said Carlos Lloréns, Ground Operations Director at Air Nostrum. “The new generation Lido/Flight 4D impressed us above all with the range and quality of its functions.”

The core features of the IT solution are the integrated and continually updated aeronautical database and the so-called optimizer. Based on all flight-related data, weather conditions and the current airspace situation including any restrictions, Lido/Flight 4D calculates the most suitable route for each flight.

Around 120 airlines with a total of more than 6,000 aircraft are currently using the flight planning solution from Lufthansa Systems, which has been successful on the market for more than 15 years. In June of this year, the first release of the new Lido/Flight 4D product generation was unveiled at the Lido/Flight User Group Conference – the next one is coming up this fall. This year’s releases cover certain basic components for migrating to current technologies as well as the first functional innovations and improvements for takeoff and landing weight optimization, crew briefing and route optimization.

“Air Nostrum’s contract renewal shows that our investment in the refinement of the solution based on feedback from our customers has paid off,” said Marco Cesa, Senior Vice President Regional Management EMEA at Lufthansa Systems. “Our innovative solution offers reliability and flexibility, simplifies routine tasks and makes it possible to quickly make the right decisions in critical situations.”

In various comparative analyses based on thousands of flight plans, Lido/Flight was able to reduce fuel costs by an average of 2 percent, cut flying times by 1.9 percent and save 1.6 percent of air traffic control fees compared to its competitors.

Air Nostrum operates under the Iberia Regional brand mostly within Spain, although it also serves destinations in Europe and North Africa. The Spanish airline is based in Valencia and is one of the three largest regional airlines in Europe.