Stepping up with MRO Software 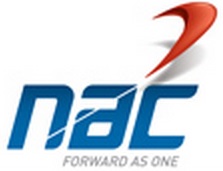 ed in 1946 and is considered as one of the biggest general aviation organizations in South Africa. The company has its head office based at Lanseria Airport, Johannesburg with four sites within South Africa. Working with customers across the African region and the globe, NAC offers an extremely wide range of products and services including… fixed wing aircraft sales (from piston engine and turbo prop engine aircraft to corporate business jets and medium sized passenger jets); comprehensive fixed wing aircraft maintenance (from line support to C-checks); specialized refurbishment, conversions and upgrades to aircraft; fixed wing charters; air safety training; pilot training; Helicopter charters; sales of rotary wing aircraft with a comprehensive maintenance service; Piper aircraft maintenance and sales; spares sales and support. 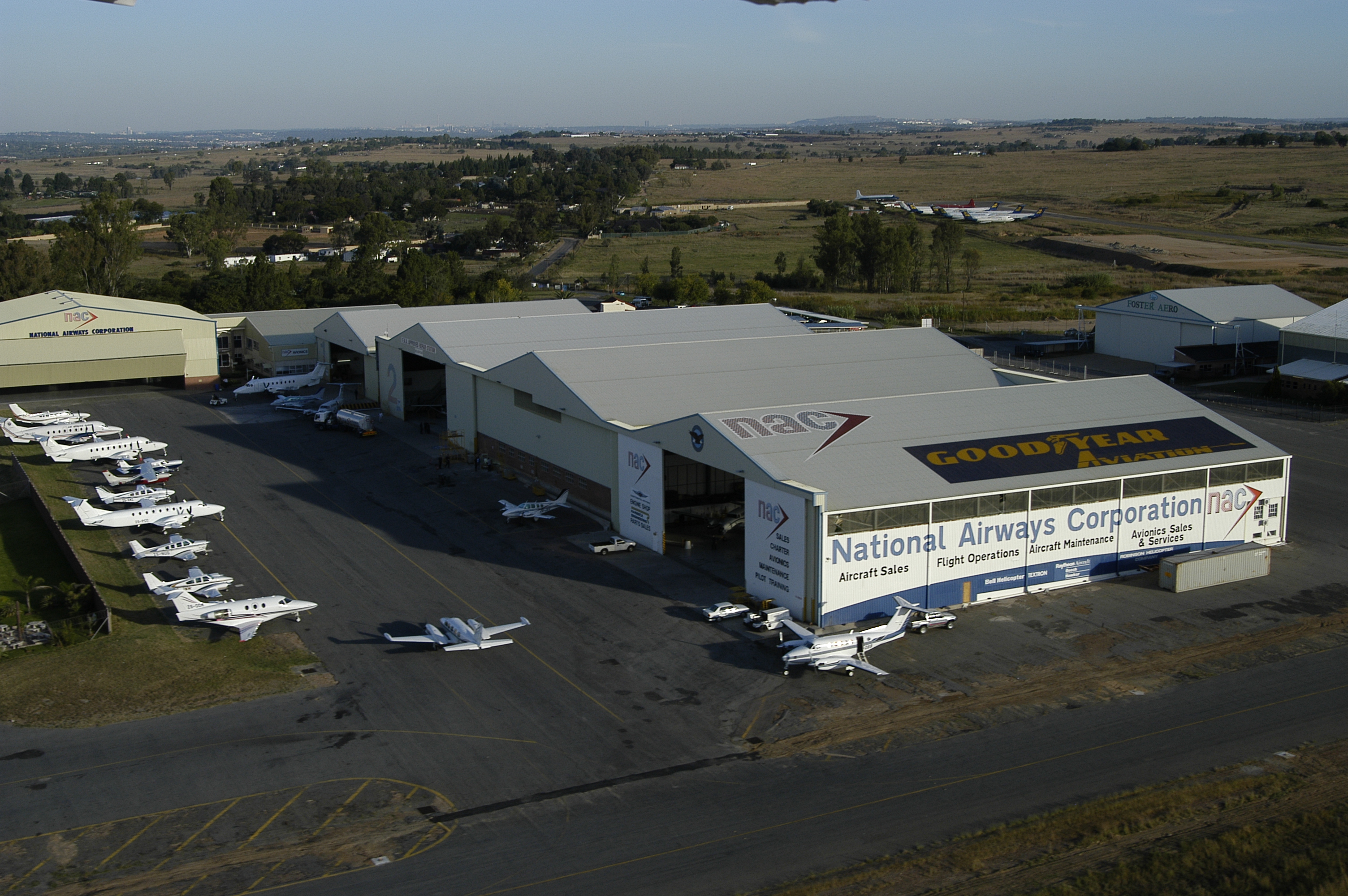 NAC also operates its own significant and varied fleet which is comprised of different types of aircraft such as King Air (200, 300, 350), Beechcraft 1900d, Embraer E (120, 145), Caravan C 208B, Codiac and Hawker Corporate Business jets as well as aircraft from the Bell Helicopter range and the Robin Helicopter range.

In 1996, a South African historical operator (at this time, part of a conglomerate of aviation companies, later to include NAC) was looking for a new maintenance information system. Special focus was placed on key criteria such as user-friendliness, robustness, and support capabilities of the supplier. After a thorough selection process, a final decision was made to purchase AMASIS. Since then the system has been running for 13 years, supporting an average of 130 simultaneous users. A few years later, another company in the group and based in Pretoria made a similar decision to implement AMASIS. With an average of 50 users, this company used the system to ensure the good management and running of its maintenance activities.

In 2009, this latter company was merged into National Airways Corporation (NAC). Due to the diversity of its activities and fleet, NAC historically had several information systems simultaneously in use to support the variety of maintenance activities required for different aircraft types that the company operated and supported. In parallel, financial information related to maintenance and parts sales had to be reflected in a further and separate financial system. And finally, in addition to merging two companies and those companies’ cultures, both information systems environments had to be merged and rationalized plus common processes had to be reworked and established.

Proper technical tracking was initially not possible causing reliance on a labour intensive manual effort, even after the aircraft had left following a maintenance check: the recovery of maintenance costs billed could become a customer relationship issue.

As part of the global implementation, and prior to the AMASIS migration itself, a detailed convergence study had to be undertaken to validate that no aircraft related specific functionality was lost and making sure that the global process was simplified and the life of users was made easier, with a high level of quality. In a few words, every aircraft type set up had to be seen as a small project within the global NAC implementation.

After the migration, from the various tools and even spread sheets previously used, two systems remained (whatever the maintenance base and aircraft type), AMASIS being the core one for maintenance, rotable and engineering support. Every maintenance location across the company’s sites and operations also had to be connected with a harmonization process to ensure that they were all using the same tools and processes, whatever fleet and final customer was involved. 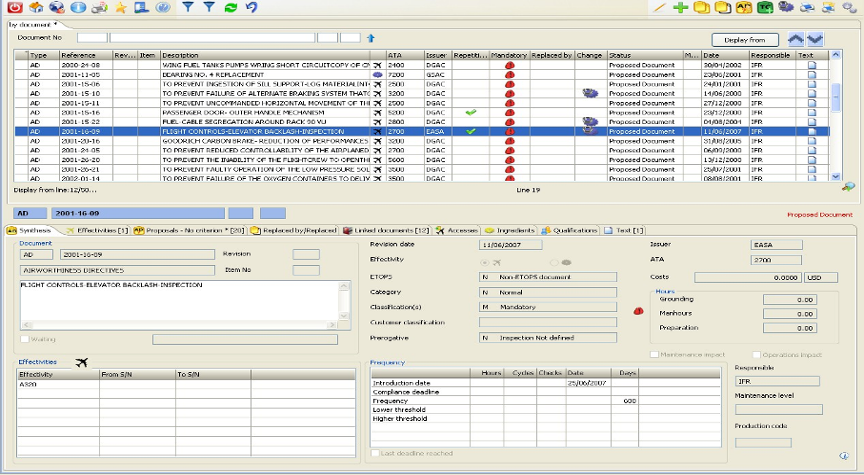 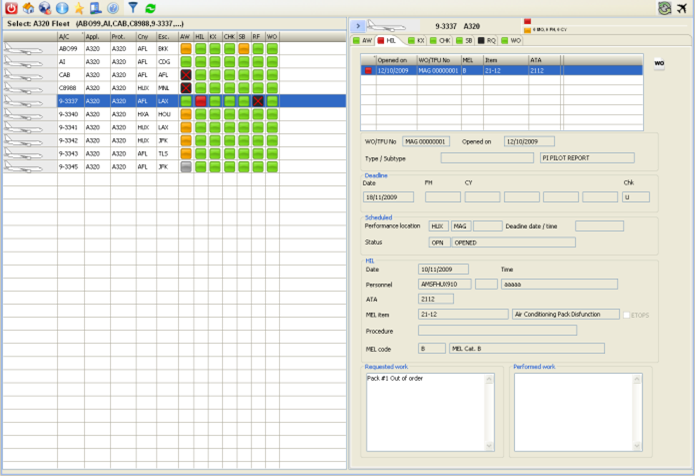 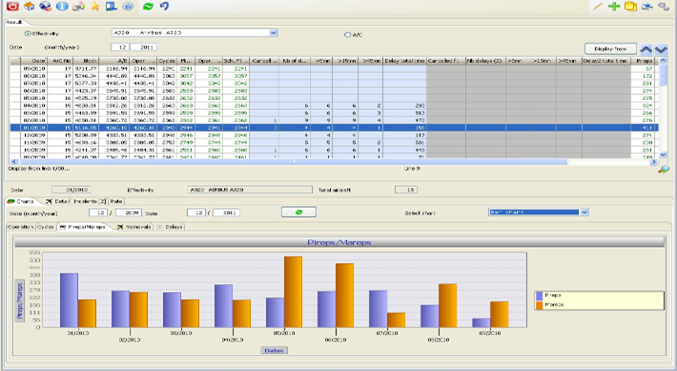 Another major challenge that NAC had to face was to allocate the right costs to the right account, bearing in mind the multiplicity of different participants and contract types involved in each single transaction (aircraft owner, lessor, customer, operator, etc.). Therefore there was no other option but to launch a full project to integrate the aircraft maintenance system into the financial system in a real-time environment. The decision was also made to combine this full integration of major systems together with an AMASIS upgrade – part of the integration requirement being native within the latest AMASIS release.

Major milestones in the migration and integration project

This multi-dimensional project had to be organized and divided into different stages that would eventually run in parallel. The biggest ‘hot topics’ that had to be addressed were as follows:

In accordance with NAC’s requirement, this re-engineering of processes and tools didn’t exclude the company’s in-house development capabilities from generating home-grown applications in the future for specific needs; instead, the re-engineering was designed to be fully customized, covering the  industry standard for an MRO module, using real-time transactions, table definitions, transaction processing and business processes/rules. In addition, various modules were designed, and coded internally in and around AMASIS to support NAC’s business demands: Spares Quotations, Customer Order Entry module with spares sales, Sundry Invoicing module, Stock-take module, MRO module and Flight Operations module.

Management vision for NAC IS

Stability and reliability together with excellent support from ifrSKEYES, the AMASIS release and associated internally developed modules, have become the foundation for our application software suite at NAC. The ‘go-live’ for the integration of AMASIS with the financial system is targeted for April 2014

Using ProFound UI development application tools, together with AMASIS and its customized solutions, NAC is not at all limited to providing its management team and its valued customers with various portals, either direct or remotely accessible through tablets or smart phones, to on-demand statistics, sales figures, maintenance costs, contract performance, aircraft reliability graphs and statistics.

Customers will be in a position to view the maintenance progress and costs on their aircraft, place on-line orders for spares and request quotations, etc. AMASIS will be our preferred maintenance application software solutions for many years to come.
Contributor’s Details:
Rob Vogel, Senior Manager, National Airways Corporation

Rob Vogel has been in aviation since 1997 in a number of positions including CIO and Head of Business Systems Development and Support. His current role is to ensure optimum connection between several information systems at NAC. Before 1997, he worked for over 22 years: first, as a system operator; then operating systems support development; and programming in industries such as broadcasting, earthmoving, sales, parts sales and workshop job costing (as National IT manager). He also has a strong financial background.

Since 1987, IfrSKEYES (formerly named IFR France) has been working with airlines, MROs, defense organizations and leasing companies of all sizes across the world and providing them with a consistent range of information systems: aircraft maintenance management software (AMASIS); airline flight operations and cost management software (KEOPS); and business intelligence solution (IBIS). AMASIS is an integrated solution to manage aircraft maintenance and related logistics. It is now implemented in more than 80 information systems around the world.