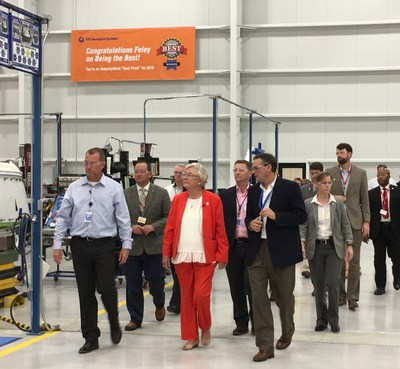 The industrial ramp-up for the Airbus A320neo is a major driver for the addition of up to 260 new jobs at the Foley site, which will bring total employment at the facility to more than 1,000 employees. The integrated propulsion systems for the A320neo will be delivered to the Airbus final assembly line in Mobile, Alabama, about an hour away from the Foley site. The expansion features advanced manufacturing technologies such as an automated material movement to index large nacelle component platforms down the assembly line, an overhead rail system with vacuum lifts and an automated painting system.

“We are delighted to provide the governor an opportunity to tour this state-of-the-art facility,” said Marc Duvall, president of UTC Aerospace Systems’ Aerostructures business. “The Foley expansion is part of an incremental investment of more than $500 million that Aerostructures has made to build or expand six company sites around the world in support of the A320neo nacelle industrial ramp-up for the life of the airplane program.”

Aerostructures was selected by Airbus at program launch to supply the complete nacelle system for the A320neo family of airplanes powered by Pratt & Whitney’s Geared Turbofan™ engine for the life of the airplane program. Over the next several years, there will be thousands of Aerostructures nacelles flying on A320neo airplanes, offering airlines and lessors a compelling value proposition through commonality and high in-service reliability. Since entry into service, the airplanes with UTC Aerospace Systems’ nacelles have performed with 99.99% dispatch reliability.

The Aerostructures business was honored to receive the Airbus Supplier Support Rating for exceptional aftermarket support of airplanes at the Paris Air Show earlier this year.