Geneva, 29 June 2015
– Early May, the now famous zero-fuel aircraft Solar Impulse 2 was forced to make an unscheduled landing in Japan due to inhospitable weather on the seventh leg of its around-the-world journey.

“The cold front is too dangerous to cross,” said an update at solarimpulse.com. “So we have decided to land in Nagoya Airfield … and wait for better weather conditions in order to continue.” 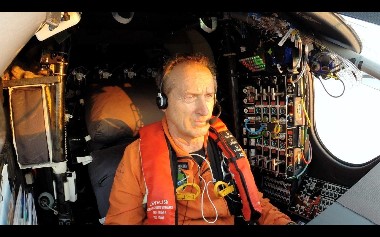 In this last minute decision to land, communications were provided by SITA OnAir using the Inmarsat SwiftBroadband-based satellite communications link. SITA OnAir communication services made it possible to organize landing permissions at an unplanned airfield and enabled constant contact between the Solar Impulse base team, the aircraft’s pilot and Japanese air traffic control.

“Providing global and reliable connectivity for this aircraft is absolutely fundamental for operational and critical navigation purposes, from nose-to-tail.” explains Ian Dawkins, CEO of SITA OnAir.

“This is not a wide body commercial aircraft. It’s about the weight of a car making it more sensitive to turbulence or other atmospheric disturbances,” he continues.

Solar Impulse 2 left Nagoya for Hawaii this morning, with André Borschberg at the controls. As he sets out over the Pacific Ocean, SITA OnAir’s services are again the sole means of communication between the pilot and the ground. Thanks to SITA OnAir, you can follow the flight’s progress on the Solar Impulse website.

Should technical problems occur or should weather conditions become unfavourable on the 120 hour flight to Hawaii, the constant ground link provided by SITA OnAir will help pilot, support crew and landing facilities organize an alternative route or emergency landing.

“The aircraft has generated seven gigabytes of background IP data and 2500 minutes of streaming IP data since initial departure from Abu Dhabi on March 8,” says Dawkins. “This data is comprised of messages from the 10,000 plus sensors covering the aircraft from cockpit data, from voice communications over IP and also from live streaming video when Borschberg talks to the media via his GoPro camera onboard.”

Classes of air-to-ground data being received from Solar Impulse: