Central American carrier continues to take a leadership position in delivering service excellence to its customers with modern, scalable IT solution

2016 MRO AMERICAS – Dallas, TX Booth 2831 (April 5, 2016) – Mxi® Technologies, the leader in aviation maintenance management software, announced today that Copa Airlines (Copa) – the flag carrier of Panama and one of the largest and fastest growing airlines in Latin America and the Caribbean – has selected the Maintenix® system for its enterprise-wide fleet maintenance management. 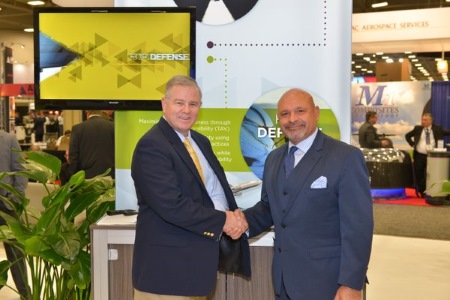 Photo: Bill Cavitt of Mxi and Ahmad Zamany of Copa Airlines shake on the deal at MRO Americas in Dallas, Texas.

Recently named “Mexico and Central America’s Leading Airline” at the 2015 World Travel Awards, Copa Airlines is committed to enabling greater operational efficiencies within its fleet maintenance management practices. In fact, Copa Airlines and Copa Airlines Colombia were named the most on-time airlines in Latin America by FlightStats (for the third consecutive year). In addition, the London-based air-travel intelligence company OAG, last January, announced that Copa Airlines is the “No. 1 on-time airline in Latin America”, and ranks No. 2 worldwide. The rankings are a strong differentiating factor for Copa in the aviation industry worldwide.

By selecting Maintenix as its maintenance IT system standard across engineering, planning, execution and materials management, Copa is looking to capitalize on more real-time maintenance management, fully-integrated with other key departmental systems such as flight operations, finance and human resources.

“At Copa we are very proud of our efforts to provide world-class service day after day for our customers. This commitment extends to the very root of our operations, including maintenance, where we adhere to nothing less than the highest standards of quality and safety,” said Ahmad R. Zamany, Vice President of Technical Operations at Copa Airlines. “Mxi proved to be the right partner with the ideal solution capable of delivering the information we need to improve our already world-class performance and to expand our business.”

This latest deal for Mxi comes on the heels of other recent contracts with leading airlines such as Cape Air, Mesa Airlines and Southwest Airlines, and reflects the Maintenix software’s expanding footprint among operators of all sizes across the Americas.

“The commercial aviation market in the Americas continues to show strong signs of growth and an appetite for IT innovation. Copa Airlines is among the leaders in this arena, having long established itself as a model for what it takes to be successful in the very competitive regionals market,” says Bill Cavitt, President and CEO at Mxi Technologies. “Mxi is very proud to be working with Copa Airlines, and we look forward to collaborating with them to further their reputation for delivering world-class services for their customers.”