Rio de Janeiro, Brazil, 04 November 2015 – SITAONAIR has now completed the deployment of a comprehensive VHF and VDL datalink network at 53 sites across Brazil, along with related monitoring and routing systems. The completion follows the 20-year Datalink Concession Agreement awarded to SITAONAIR by the Brazilian Department of Airspace Control (DECEA) in 2010. 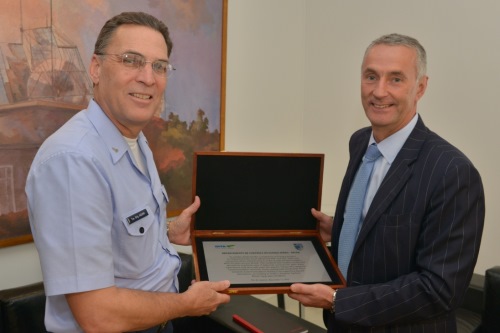 The network, completed within the five year timetable, is providing full coverage of Brazilian airspace at FL245 (24,500ft). It enables airspace users to access the Departure Clearance (DCL) and Digital-Automatic Terminal Information Service (D-ATIS) datalink services deployed at 23 control towers across Brazil. Importantly, it constitutes the communication cornerstone on which DECEA will further develop the air traffic management concepts of its strategic modernization program, SIRIUS.

“The huge influx of visitors to Brazil, thanks to the unique combination of the FIFA World Cup™ last year and the Olympic Games next year, has provided a major catalyst for our modernization program,” said Aviator Lt Brigadier Carlos Vuyk de Aquino, Director General of DECEA. “However, we also have much longer-term objectives, based on the high air traffic growth forecast for the coming decades. We are on the same path as the FAA in North America and EUROCONTROL in Europe in making our airspace safer and more environmentally friendly.”

“SITA, and now SITAONAIR, has been one of our key providers for 20 years, starting with the deployment of an ACARS VHF system in 1985,” continued Aviator Lt Brigadier Carlos Vuyk de Aquino. “Since then, we have made the most of SITAONAIR’s wide-ranging expertise in the air transport industry, and in air traffic control in particular.”

The new VHF/VDL datalink network, which meets ICAO’s exacting standards, provides DECEA with the most advanced data link communications and it is already being used by airlines flying across Brazil. Not only does it provide access to today’s datalink services, such as DCL and D-ATIS, but it also paves the way for future ATC datalink communication services, from continental Controller Pilot Datalink Communications (CPDLC) to trajectory based operations, as specified in ICAO’s Aviation System Block Upgrades (ASBUs).

“Our greatest challenge during this project has been logistics,” said Ian Dawkins, CEO of SITAONAIR. “We have faced considerable difficulties transporting, installing and operating the hardware in some of the most hostile environments, like the Amazon jungle. But our team, working closely with DECEA, has completed the task ahead of time, which is a very considerable experience.”

As well as the deployment, SITAONAIR is also responsible for the on-going management of the VHF/VDL network for the next decade.